i just moved to LA from Dayton, Ohio and I have noticed that I am having problems getting laid. Telling them about my 80’s theme band “Pink Rock Glitter” doesn’t seem to impress them, and all I can afford is a damaged rental car from this werid pakistani guy on Cahuenga Blvd. I am wondering now if it’s a good idea to tell them that I am a nude photograper, because that should get me laid, right? Now my question is: How do I get started? I have no experience. Any ideas?
-shutterbug

Jesus H. fucking Malmsteen Christ. I thought Great White did away with all of you a couple years back.

In fact, I still have a copy of the newspaper: 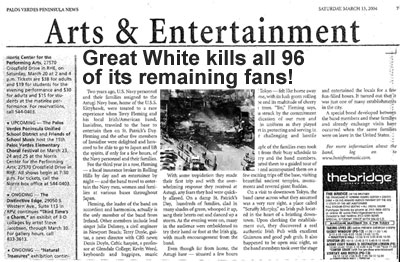 First of all, you should get your band all together in one place, pile your instruments in a pile in the middle of the floor, remove all of your leather and feather boas, and place them on top. Now, instead of doing what the five of you would NORMALLY do when faced with this situation, I want you to set fire to your pile. Problem 1: solved.

Here’s the secret to getting women to pose nude for you: you have to pay them. Lots. The hell did you get the idea that they gonna just drop their panties ’cause you got a zoom lens? You’re gonna have to work three jobs just to support this hobby. besides, buddy. i read craigslist, too. the word is out. your lens ain’t zoom.