Wanna Do Some Blow? 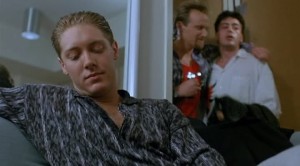 After binging on cocaine for 12 days, I experienced some rough heart palpitations. I sent my rent-a-girl home, gave her the rest of the white as a tip, went to bed and got some sleep. Its been two days and I haven’t touched the Bolivian Marching Powder but my heart still beats irregularly and it sometimes feels like its straining to leap out of my ribcage like one of those chest-bursting Alien babies from the Sigourney Weaver flicks. Should I see a doctor or just stop crying like a little biznitch?

Whoops. Considering how long ago yo’ ass sent me this, it’s possible you’ve snorted Drano and were found belly-up foaming out of your nose. If that is the case, please refer to my complaint department.†

Anyway, are we the only country in the whole fucking world with a word like “binge” in our vernacular? Binge eating, binge drinking, drug binge, ass-fucking binge. Don’t you know where these things lead?

Please refer to the gospel on this matter, the movie Less than Zero. All binges lead to you crying and sucking cock for blow, right beside Robert Downey, Jr. But hey, ‘least you’ll get to meet a celebrity, and maybe you can finish each other off. Maybe he’ll even give you the courtesy of a reach around.

Look, we aren’t all Keith Richards or William Burroughs. We won’t be shooting up when we’re 72. Most of us will be lucky to (a) be able to shit, (b) have that shit land in the bowl and not (c) our pants. If I can complete that trifecta when I’m 72, I’ll consider it a life fulfilled.

I’m about the last motherfucka in the world to be telling anyone to stay off the drugs, but damn, a little moderation goes a long way. How about a little scale for perspective?

MUCH LIKE THE BUDDHA PATH, THE MIDDLE WAY IS OPTIMAL.

† COMPLAINT DEPARTMENT: If you’d like to complain, please write out all complaints on a 3″x5″ index card. Write legibly and use black ink. Then, fold the card over and stick it really far up your ass, because Murray doesn’t give a shit.