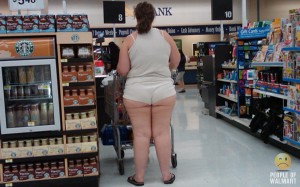 Why the fuck does everyone hate Wal-Mart so much? All it does is employ all the immigrants and hold them down and away from the good jobs? It is puzzling.

Oh, I loves me some Wal Marts. That’s what the folks in Indiana call them, ’cause they add an unnecessary ‘S to the end of everything. Wal Mart’s. Kroger’s. TRAILER PARK’s. Hell, where else can you buy an entertainment center for $27.87? Sure, that piece of shit corkboard crap will collapse within two weeks under the weight of your 19 inch tay-vay and rabbit ears, but when you’re broke ass, you take what you can get.

Where else can you buy certified MADE IN THE U.S.A! U.S.A.! Sam’s Choice weak ass New Coke formula soda made in REAL American sweatshops in Korea? That’s what America’s all about. Making the rest of the world work hard, so we don’t have to (or have a choice to, once our factories all have shut down).

I beam with pride knowing that Wal Mart helps my tax dollars subsidize thousands of hard-working American families who would otherwise make too much damned money to earn a cut of welfare, and that shit would just be UNFAIR!

I love Wal Marts because, no matter what city I’m in, all I’ve got to do is look for some falling prices, and I’ll find the white trash contingent, and I’ll be right at home. They could drop a Wal Mart right in the middle of the Hamptons, and it’ll be crawling with toofless dudes in John Deere hats, lining up to buy giant bags of pork rinds and ammo.

Most of all, though, I love Wal Marts because, every time I go in one, some dude who used to beat my ass is working there pushing carts. I don’t buy anything. I just push carts all over the lot, and watch him go get them. It’s much more entertaining than my broken ass $50 Wal Marts TV.