President Bush on Friday revealed his administration’s plan to quell the raging wildfires that have spread throughout Southern California.

“In short,” Bush said with a smug grin, “drop New Orleans on it.”

“I’ve spoken to the people of Malibu, and I feel for them. So, I thought to myself, ‘what puts out fires? Water!’ Where can I get lots of water? It was a pretty easy decision, after that.”

According to experts, the Bush plan solves two problems at once: extinguishing the raging fires in California, as well as wiping one of Bush’s largest political blunders off the books.

“There are still people in New Orleans who have no jobs, who can’t go back to their homes,” David Paulison, director of FEMA, said. “Now, they’ll have homes in the worker housing in Malibu, and steady jobs. I toured some of the houses in Malibu, and the conditions sickened me. We need all the hands we can get for all the landscaping work that will need to be done in Malibu.”

At least one Malibu resident echoed those sentiments. “It got so bad at my house one night, I didn’t know what to do,” he said. “I smelled smoke, and I thought Javier, my butler, had left the grill on again. So, I fired Javier, and called my driver in to check the grill. When he told me ‘senor, the grill is no on’, my heart dropped. We told Juanita, our maid, to pack our bags. We got out of there and high-tailed it to the Beverly Hills Hotel. The penthouse suite was already booked, so they put us in a regular ‘premium luxury suite’. How can anyone live like this?”

When asked about the details behind actually airlifting one city and dropping it on another, Bush said the the details were “still kinda iffy” but that they are working on designing a “really big ‘copter. VROOM!”

He did, however, provide this expert sketch of how the drop would be carried out. 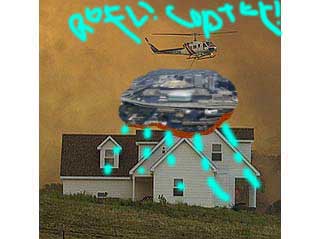 “I hope the Bush plan works,” said another Malibu resident. “Last night, my agent’s guest house burned down. Now, where are his guests supposed to stay?” he said, in shock, “In the main house?!?”

The above news story is completely fabricated, and any and all similarities to actual things that the president or other officials have said or will say is sadly, coincidental.