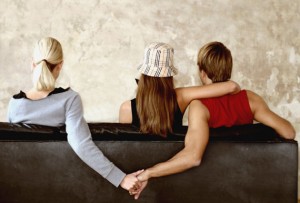 You may not remember my story, but I wrote you last year. The guy I was involved with was about to get married in November. After reading your response and the criticizing comments from others, I decided to give you an update. Well, yes he did get married. (I’ll admit that I was very hurt) But to make a long story short, nothing between us have changed. He was married on a Saturday, I fucked him the Wednesday before. He called me right before he got married. One week later, he was back at my house. I used to feel bad for fucking a married man. But you know what Murray? Why should I feel bad. I think that if these women knew how to take care of their fucking men, then they wouldn’t have to stray away. I consider myself the lucky one because at least I can just walk away from the situation when I want. He’s married now, and is regretting every moment of it. Don’t ask ME why he got married in the first damn place. Guess you didn’t believe me when I told you he must’ve felt obligated to marry her. I on the otherhand, I would rather just fuck him when I want to and send his sorry ass home to his wife who apparently doesn’t know how to please her man. And like before, I see him more than his damn wife does because she puts her fucking job before their new marriage. (Big mistake ladies!!) So, to all of your bloggers who criticized me for staying with this guy, I know he ain’t hittin on shit. The sad thing is that his wife doesn’t know and she probably should have done an investigation on his ass before comitting herself to him. I don’t mean to sound like I’m bashing the wife because honestly I don’t even know her. You, Murray, may look at the situation and feel so sorry for the wife and think of me as the trifling ass hoe. Well, go right ahead, but let this be a lesson to all the women who think the have a perfect marriage and the perfect man. There will always be some other woman out there who can and will have your man.

And this right here is why I started doling out my heart felt advice in the first damned place. People are all HEY WHAT SHOULD I DO? The answer is always obvious, but they’re gonna do what they want anyway, which is the most retarded path possible. U DON’T KNOW HIM LIKE I KNOW HIM!

Honestly, I don’t feel sorry for anyone in the situation. I don’t much give a fuck. It takes years and years of hard ass work on your point to get to the point where this shit will be funny on Springer for 10 minutes of our time. So, keep up the good work, and you’ll get there! AIM HIGH!

At least you’re not sitting there telling us “BUT HE LOOOOOVE ME! HE LOOOOOVE ME!” which, quite frankly, is making this letter kind of boring. We’re pulling for you, here. YOU CAN WIN YO MAN. You need to fight that bitch, film it, and provide us with a live video feed! You need to marry him and have like 154624516452 of his babies. THEN WE’LL CARE! I PROMISE!

Meanwhile, quit bothering me with this petty, run-of-the-mill cheating ass other woman on the side thing. Woman, you can’t even do a good job at being a crazy ass ho. We’ve got standards around here.

You want a REAL problem? I had to drive a cocklicking fucking PT CRUISER for two weeks, and FIGURE OUT HOW TO SOMEHOW NOT BLOW MY FUCKING HEAD OFF!