How to Catch the Right One

Feed my some of your wisdom. What is your viewpoint on Love in general. I am a mother of one and my husband and I are seperated. I doubt that we will ever get back together. I am quite sure it will end in divorce. I am not ready to date obviously, but when I finally am, what would some good advice be for getting back into the scene and finding the right one. ‘Cause I don’t want to waste my time a second time around. Thanks

When asked to define love, I’m not sure that anyone has ever defined love better than Brak, from Space Ghost:

You know love is a happy time. All throughout the universe. It’s when the male part of the species goes to the female part of the species and says: “Hey, do you want to go on a date?” And then she would say: “Why yes, I’d like to go on a date.” If you’re LUCKY!- And then you go to a restaurant, and she gets something called A salad. And then he gets a big piece of beef, that he eats. And that to me ladies and gentlemen, is LOVE. Kinda makes you cry, doesn’t it?

Anyhow, there’s a bazillion websites out there raking in fortunes from everyone’s neverending quest to FIND THE RIGHT ONE. OMG COULD YOU BE THE RIGHT ONE?

Fuck all that nonsense. The harder you try, the more desperate you’ll be, because you’ll just wanna get the whole stupid thing over with. You’ll settle down with someone just as desperate as yourself, and you’ll cling all over each other like mold on rotting tomatoes. Note: This is also a preview of what your chilluns will look like.

The desperation of the world is getting even stronger, and I’m sure the innerdating sites are largely to blame. YOU MEAN I CAN JUST TAKE A QUIZ, HIT ENTER, AND IT WILL COMPUTE AN SPIT OUT MY SOULMATE? YES, IT’S TRUE! AND FOR ONLY $49.95, I CAN DO THE SAME FOR YOU! Take a look at the last happy couple I brought together: 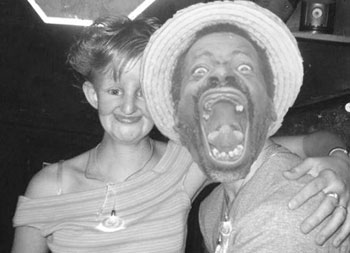 If you prefer to go it alone, and keep up the great eternal hunt, you’ll need the proper equipment to make sure you don’t pass the right one over. 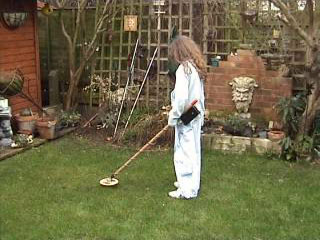 The “right one” could be living literally right under your nose! He’s been holed up in his underground bunker beneath your back yard since 1972. He’s just waiting for the “right one” to come along, and replenish his supply of canned meats. 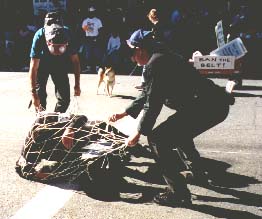 These guys got tired of waiting around for the right one to find them, so they utilized their hunting instinct. Ya gotta be careful, though. The nets can damage the right one’s tentacles if you’re not careful! 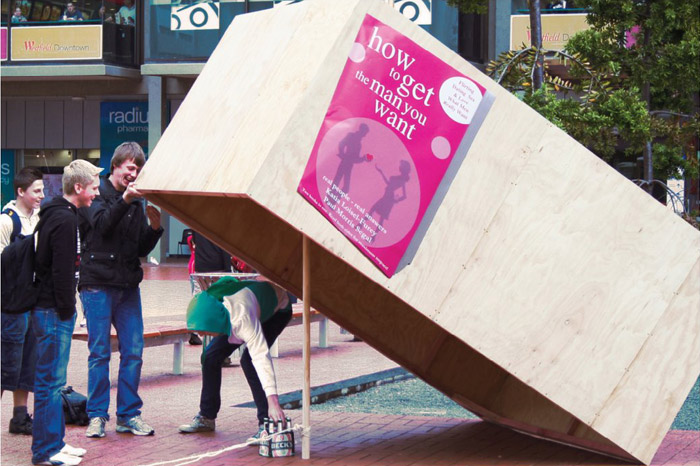 If you’re looking for the HUMANE way to snare the right one, this is your best bet. Set the trap, bait it with some booze, nachos and playboys, and wait. You may even catch more than one, but you may have to separate them, so they don’t fight. This method will not harm the right one, and gives the added benefit of holding them in place long enough that you can be sure that they won’t flee.

Good luck trapping the right one. I found love the ol’ fashioned way. By being myself and not being so intent on FINDING THE RIGHT ONE so badly that when my Maybelle came along, there was no doubt about it.

And THEN i put her in the cage!